Asplenium x tagananaense, the hybrid between A. hemionitis and A. onopteris must rank as one of the rarest ferns in the world. A single plant was discovered in 2009 on the island of Tenerife. Despite careful searching only this one plant has been found. While on Tenerife earlier this month I went to see if I could refind it. It is located on a ferny trail near to the village of Taganana after which it is named.

I managed to relocate the fern and although smaller with fewer fronds than on my previous visit in 2009 it appears to be in good health with a new frond emerging.

The two parents are very unlike in frond structure. A. x tagananaense resembles A. hemionitis more closely than its other parent but the lobes themselves are pinnately lobed. I examined the fronds carefully to see if I could recognise any other characters that may indicate its hybrid nature. One small character was fairly obvious – tiny teeth on the cartilaginous margins of the frond. I examined many fronds of A. hemionitis and the margins were smooth or occasionally a few small blunt teeth were found. In the hybrid the teeth were small, but pointed and occurred all round the frond. A. onopteris has an almost undetectable margin without teeth. Mentioned but not emphasized in the original description, this may prove to be a useful diagnostic character although unless other plants are found it is impossible to know how consistent the teeth character is.

It does seem certain that this plant will probably expire in the next few years so if you are in an area where both species occur keep a look out for any odd forms- you never know it may turn out to be the second example of this interesting hybrid. 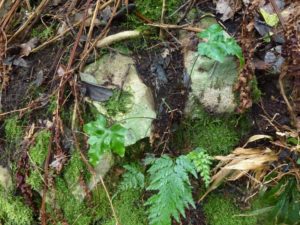 The sole plant with 2 mature fronds and a new crozier. Note adjacent plant of A. onopteris 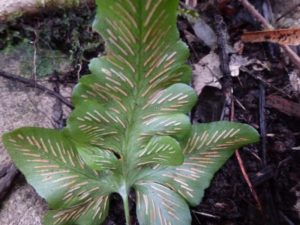 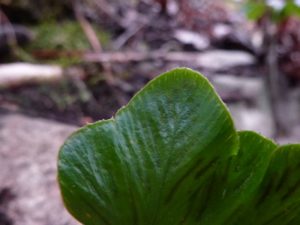 10 thoughts on “Asplenium x tagananaense – still hanging in there!”