This little fern over the last couple months has made me smile each time I see it. Through all the horrible weather its always a lush little gem that’s fun to discover up in a  dark woodland corner. Its been happy growing in a log accompanied by a Hepatica. Once named Blechnum penna -marina ‘Cristatum’ , I believe it may go by Austroblechnum penna-marina ‘Cristatum’ now. Really only the size of my hand it makes a quiet statement.

I had to share my joy at finding what I thought was the Sphenomeris chinensis  that I put in the Harlow Carr woodland creeping rather well that were given to me to trial!  However it has come to my attention that it may be something else all together, so now I have a bit of a mystery at the moment. It has been identified as Araiostegia perdurans, so some closer investigation will have to take place. This is great in one way because it’s a whole other new fern for me! I put them in as an experiment very close to some logs to see if they would creep over them, and they have! They also survived one winter, 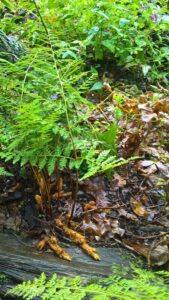 fingers crossed they survive another one. They add a great lacey texture to the surrounding plants as well.
https://www.rhs.org.uk/gardens/harlow-carr/garden-highlights 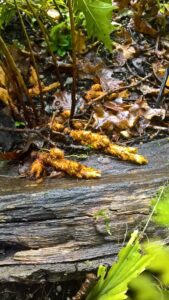 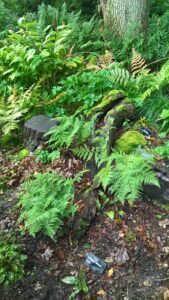 This spring I’m hoping that some Polypodiums will help me in some hard to plant up areas! In our rock banking there are numerous crevices between the stones that needed to be cemented to keep back the ever persisting erosion caused by sudden flooding as well  as a intense  water table causing some stones to slip. It works well to keep the erosion at bay but then these areas become barren with out much life. I don’t doubt that over time with some organic material that  would gather up some nice specimens may emerge, but I wanted to quicken this process, and a fern experiment is fun.

We have several old clumps of Polypodiums at Harlow Carr and one was infested with some persistent Symphytum which dominated its fronds. This gave me an opportunity to break it apart and divide out its rhizomes and showcase it another way. I just needed to be super careful to avoid planting back any Symphytum roots as they are so similar.

In the cemented crevice I actually first put a small layer of our grey clay here so the compost has something to attach onto. and gave the mix some weight.  I also used the clay here because I’m so close to the waters edge, during a storm the water levels rise and the flow can be intense , easily washing away anything not well rooted. The lack of drainage is a concern but over time its my hope that the Polypodiums will mature and catch more organic matter and crawl over the stones.  I could also make a bowl shape with the clay as well to hold the compost in a vertical crack.

It’s my hope these crevices ‘green up’ with ferns , especially some  lovely creeping and crawling Polypodiums!

There have  been a few ferns that have stuck out at Harlow Carr recently amidst all the snow and freezing temperatures we have had. And even one that gives a more exotic feel in cold days, that being the Blechnum chilense! Also Woodwardia fimbriata has remained a great wintergreen addition in areas without much above ground.  These have both been great tough and beautiful ferns so far along the streamside this winter!

The Tree ferns at Harlow Carr are all wrapped up for winter, but I couldn’t help appreciate them with the snow on them! We always look forward to seeing their new fronds emerge in summer and this year after this winter cold it will be even more exciting!

At Harlow Carr we have been in the middle making an Exotic garden full of great foliage plants, it will also serve as a Secret Garden with lush plantings, a small glass house and arches for vines to grow with a winding pathway that takes you through it all. Among the plants will be some Tree ferns with some great mature trunks that will gives that mystery and adventure a Exotic garden can have. However with this lack of rain we have been receiving over the last couple of months we are a bit worried they may be in a bit of a shock. So Horticulturalist Russ Watkins came up with the idea of wrapping the trunks with hessian fabric to maintain a bit of the moisture and also keep them cooler. This also helps when there is a high demand for other plants needing water at the moment around the garden and a small task force at hand. So far so good and they seem to be maintaining their moisture, fingers crossed!

Another experiment at Harlow Carr this year is placing more ferns right in the flood zone in our new streamside bed.  After seeing what has survived our wet winter with the flooding that took place in parts, I’m going back in to other areas to see how much further I can push a fern! This time I am putting one right on its own island next to a rock edge that I built up with stone. During dryer months it wont see much water but could be potentially submerged in storms for good parts of the winter. I am trying this with a  Osmunda regalis ‘Purpurascens’. Already its mature, so I’m hoping this helps.  Its my hope that these plantings at the waters edge will green up and soften the stone. In addition the idea is to also see if it aids in slowing the storm water down a bit as the sediment builds up around them creating more space to grow into. Though if this specimen does take to its new home, I will have to keep it to a smaller size as they

can grow to a respectable size.

But to my surprise what I didn’t take into account is the awesome shadow that takes place on the stone behind it. I do hope others will be able to see this from afar! This majestic fern has always been one to watch through the seasons at all its stages of growth.

Dryopteris crassirhizoma is a fern I am impressed with every year in the garden and this year I was determined to give it its due attention. Its one of the earliest ferns to come up at Harlow Car and has a wonderful lime green tinge that always shines in that soft spring light that comes through the branches of the trees. Its illuminated! But even more I love it for its sturdiness. It has a soft appearance that is carried on a thick dark coloured rachis full of scales. Its also impressed me growing so close to tree roots as well as surviving drought conditions at the bases of these trees.  Its defiantly one I would like to consider more to create a back bone to a bed in the future!

The new colour of the emerging new fronds of Adiantum venustum was a lovely surprise today.

Lastly for today a quick mention of some Autumn colour of a fern that I’ve cheered about in a past post. I claimed earlier this year Phegopteris  connectilis to be my favourite fern and today I discovered its lovely autumn colour! Planted with a still going strongly green Dryopteris affinis ‘Cristata The King’ it stands out. It also contrasts well with the purple colour of Ophiopogon planiscapus ‘Nigrescens’ and the blue shades of Cheilanthes lanosa.