A personal recollection by Ronnie Viane 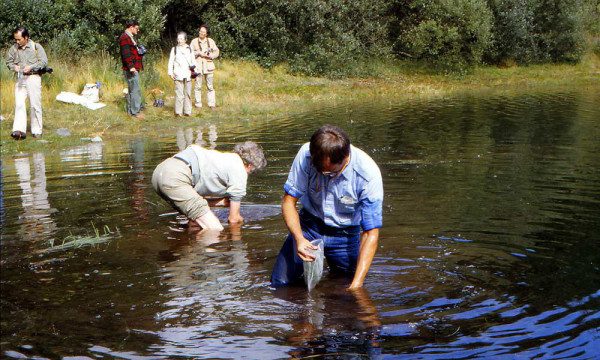 I first met Clive at the start of the field trip that he organized prior to the 1983 Pteridological Conference in Edinburgh. We first went to Wales, an area he particularly loved as I found out later, where he impressed us with his enthusiasm and energy, struggling ahead of the flock through bramble infested valleys in the quest for special forms of Dryopteris affinis (e.g. ssp. robusta later dumped as a form of ssp. borreri). He also tried to convice us of the beauty of Isoetes, showing quite some stamina getting into the cold water to fish for specimens together (left, with Carl Taylor and Kunio Mitsui, Jim Montgomery, Florence Wagner, and Michael Cousens watchin on the shore). This first trip was the start of a series of travels in southwestern Europe.

In September 1986 we went to northern Spain to prepare the fern excursion for the 1987 Berlin Botanical Conference (left, with Prof. Mathias Mayor López (Oviedo University). A year later, we returned with a group of about thirty, half of them Spanish: a great opportunity to establish international contacts, one of Clive’s favorite activities. The Spring of 1988 saw us exploring the Iberian peninsula and southern France for Isoetes. During the trip we went as far as Andalucia, visiting Betty Allen, and linked up with several local botanists, e.g. Carmen Prada (right). 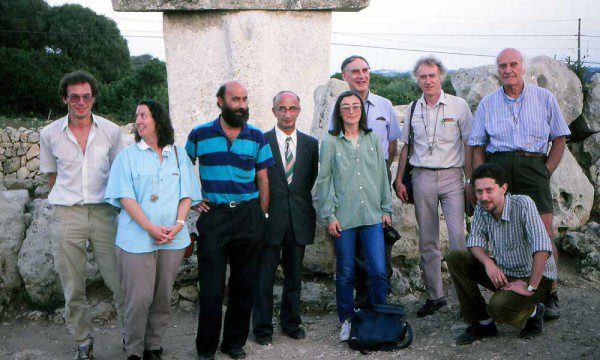 In September 1988 we were invited to give a lecture at a conference organized on Menorca; on the photograph of “los profesores” (left to right: Ronnie Viane, Carmen Prada, Julio Iranzo, Prof. Imperato, Paola Cubas, Peter Bell, Clive Jermy, Enrique Salvo, Rodolfo Pichi Sermolli). 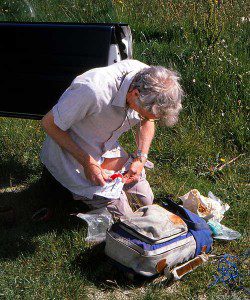 A visit of Donald Farrar to Clive set off the Trichomanes gametophyte craze in Britain and Europe. After discovering “independent” gametophytes in Wales, Clive wanted to find them on the continent, with one of the most obvious places to look being Brittany. The 1990 BPS excursion was a good excuse, I picked him up at Calais and we dashed off to Douarnenez. On May 29th, after a difficult start due to Clive’s trouser problems which were swiftly solved with some red tape (right), our torches illuminated the first continental Trichomanes gametophytes in a small cave at the Pointe de Beuzec. 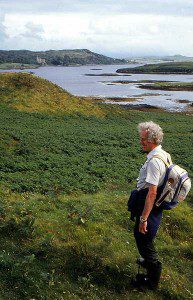 In 1991, we did a long trip to Scotland with Ilka Kukkonen, first joining the BPS excursion to Skye (left), followed by visits to Inverewe Botanical Garden, Aviemore for Diphasiastrum, and climbing Ben Alder for Athyrium ‘flexile’. Inevitably, at Ben More we had a Carex stop, compensated by a trip down eastern Kintyre for Dryopteris x sarvelae (where we surprised Hugh Corley …). 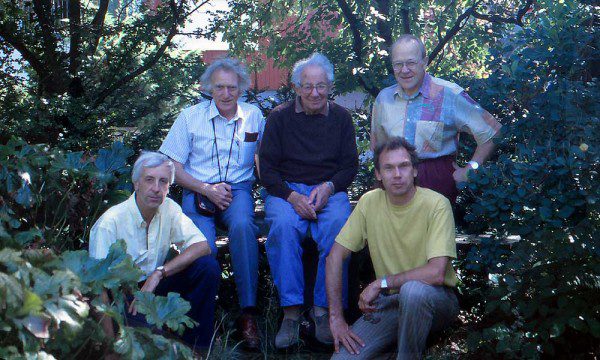 Several continental pteridologists had been over to the BM for Clive’s advice, they had often expressed their need for more regular updates about the latest fern news and developments in Europe. Gradually the concept of organizing annual meetings in European fern hotspots developed and led to the first ‘international’ meeting in September 1992. At the “Champ du feu” in the Vosges mountains, where Claude Jérôme had discovered interesting populations of Diphasiastrum species, pteridologists from 6 different countries had their first GEP (Group of European Pteridologists) meeting. After the excursion, on September 2nd, a small delegation visited Tadeus Reichstein in Basel (right, from left to right: Michel Boudrie, Clive Jermy, Tadeus Reichstein, Ronnie Viane, Ilka Kukkonen). A week later we were off to the Azores … 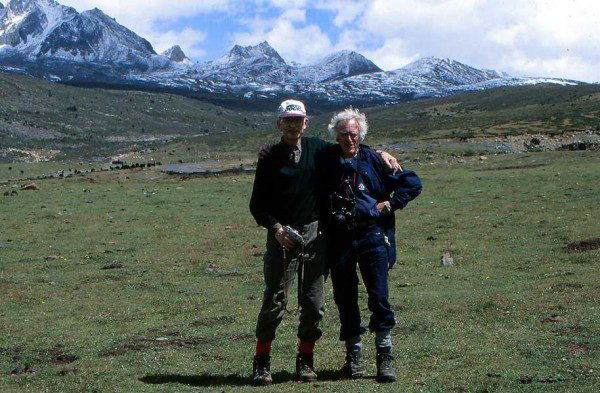 During his active career Clive never visited China though he had good contacts with leading pteridologists. I only had to ask him once, in 1997, to join me and Bert Hennipman (left) on a trip to Sichuan and the borderland with Tibet, a great experience thanks to our Chinese colleague Xian-Chun Zhang.

I am fortunate that he became a friend, impossible to forget him!