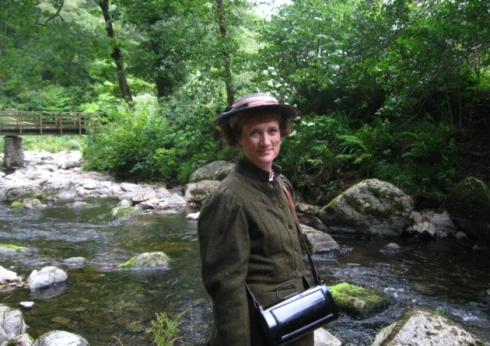 Adventurous Victorians once flocked to North Devon on the hunt for coveted ferns, as SARAH WHITTINGHAM explains

What is it that attracts thousands of visitors to Devon every year? Many people would say the stunning scenery. Not to mention the cream teas. But 150 years ago it was ferns.

From the 1830s until the First World War the British went fern crazy. Charles Kingsley, author of The Water-Babies, christened it Pteridomania, or fern madness. And Devon – particularly the area around Lynton and Lynmouth – was a Fern Paradise.

In the 19th century these villages were difficult to get to — there was no railway station until 1898 and no pier for steamers to dock at. They appealed to the holidaymaker who preferred the attractions of the natural environment to the commercial entertainments at some other resorts. Essentially, they provided plenty of Rational Recreation. This meant pursuing edifying and educational activities that would exercise both body and mind. So the North Devon coast was full of amateur naturalists using their time profitably — peering into rock pools and capturing their contents, tapping rocks with hammers, catching butterflies in nets, or setting out on fern forays in the valleys of the East and West Lyn rivers, on Countisbury Hill, or in the Valley of Rocks.

Fern hunters often got themselves into peculiar situations while out collecting their spoils. For instance, fern expert Charles Druery, who caught Pteridomania on Exmoor in 1881, wrote how he once dislodged a ‘very desirable’ hart’s tongue fern that was growing on the side of a stone bridge spanning a fast-flowing stream near Barnstaple. He leant over the side and used a trowel lashed to a stick to tickle the fern out of its retreat. He then caught it in an open umbrella suspended under the arch by a piece of string.
Never miss an article

This article first appeared in the July issue of Devon Life. Make sure you never miss an issue by taking up one of our great subscription offers. Learn more at subscriptionsave.co.uk

Locals made a little money from the craze by guiding tourists to fern localities. But some realised that it was more profitable to keep the sites secret. They supplied the ‘addict’ with sought-after rarities, while asserting that it was far too dangerous for the lady or gentleman to find the plants themselves. Writer Margaret Plues recalled that her specimen of maidenhair fern came from Ilfracombe, “but I had not the delight of finding it. The donkey-women make a monopoly of it, and sell it to all Fern-lovers. It was in vain to coax and wheedle, to promise a larger sum for the pleasure of gathering it myself.”

Most Victorian plant nurseries sold ferns, and many specialised in them. Edmund Gill established a fern nursery in Lynton in about 1868, when he described himself in commercial directories as an experienced collector, and issued catalogues such as One Thousand Species and Varieties of British and Exotic Ferns, Collected and Cultivated for Sale.

The main fern dealer in Ilfracombe was John Dadds, who started collecting ferns around 1852, and set up Dadds’ North Devon Fernery and Rosary in the Langleigh district of the town at the end of the decade. In 1890 the Ilfracombe Gazette wrote (seemingly without irony): “Armed with a basket, trowel and a few short sticks…he has gone over nearly every inch of hedgerow in North Devon, and the choice species and varieties of the fern which had previously adorned their banks have been carefully removed and replanted in the Langleigh Fernery.”

Even when visitors returned home there were ways to supply their continuing fern needs. Ladies from Devon, such as Miss Griffiths and Miss Clyde from Barnstaple, advertised mail order operations in Myra’s Journal of Dress and Fashion, offering “Devonshire Ferns. Twenty roots, six varieties for one shilling, or 100 roots, nine varieties for five shillings.” Professional fern touts scoured the countryside for huge numbers of ferns, sent them up to the cities in hampers on trains, and then sold them in the streets, or hawked them from door to door. In 1896 The Gardeners’ Chronicle reported how, as there was then no bye-law against taking ferns from the wild, two fern stealers – who had hidden 5 cwt of roots in an outhouse – had been charged at Totnes with damaging Devonshire hedges. They were sentenced to four and six weeks’ hard labour each.

The overwhelming desire of fern lovers and fern stealers to find rare specimens led them to lean over fast-flowing rivers, descend precipitous ravines, wade through bogs, and scale rock faces and waterfalls. Fern-hunting accidents were common, sometimes even fatal. Perhaps admiring the beautiful Devon countryside while enjoying a delicious cream tea would be a more enjoyable holiday pursuit after all. n

Sarah Whittingham is the author of Fern Fever: The Story of Pteridomania (Frances Lincoln, 2012, £35).

Charles Kingsley’s younger sister Charlotte, wife of the Reverend John Mills Chanter of Holy Trinity Church in Ilfracombe, published Ferny Combes: A Ramble After Ferns in the Glens and Valleys of Devonshire in 1856. In 1862 the Reverend Zachary Edwards published The Ferns of the Axe and its Tributaries, and the eccentric antiquary Peter Orlando Hutchinson produced The Ferns of Sidmouth Illustrated With Impressions of the Ferns Themselves.

But the writer who did the most to advertise the ferny charms of Devon was Francis George Heath. Heath (1843–1913) was a civil servant, a pioneer of the Open Space Movement, and author of around two-dozen books on rural life and natural history, including eight bestsellers on ferns. His first effort, The Fern Paradise: A Plea for the Culture of Ferns (1875), ran to eight editions (the last one in 1908). The Fern World (1877) ran to twelve editions, the last published in 1910. The romance of Heath’s descriptions, together with charming illustrations, encouraged many to follow him to ‘Fern-land’.

Greenway, Greenway Road, Galmpton, near Brixham, Devon, TQ5 0ES
nationaltrust.org.uk
A rock garden was remodelled into a delightful fernery by Susannah Harvey sometime between 1870 and 1882. Extensively replanted in 2003. Also, tree ferns in the garden running down to the River Dart.

This article first appeared in the July issue of Devon Life.