I have posted my updated list for 2015. As usual a few losses across various groups. Most of the less hardy species came through last winter either undamaged or have recovered. Athyrium rupestre was a disappointing loss but I had already noted that this species was particularly adversely affected by heat and dryness. It would probably be OK in cooler, wetter parts of the country.

I have found that some Polystichum species are rather unreliable. If they do well they can suddenly deteriorate or die the following year. This year I have lost P. setigerum, P. x bicknelii and a P. braunii. P. chilense did very well last year but is now in intensive care as is a 2nd P. braunii. Also P. wawranum is showing worrying signs such as a lack of new fronds. I am not sure why Polystichums seem to be particularly affected by this phenomenon.

Each year I only list ferns that are planted in the garden or grown in planters or containers that have survived at least 1 year exposed to the elements. There are several new plants on the list that have come through last winter in the garden. One new addition to the list although it has been grown in a sink outside for over 20 years is Asplenium ritoense. This occurred as a contaminant in a spore sowing of A. oblongifolium and I have not been able to identify it to my satisfaction until recently. It is an attractive, clumping species and has proved to be very hardy but I have never seen it anywhere else. It would be of interest if anybody else grows it. Presumably the original spore came from a horticultural source as the 2 species have different natural ranges. 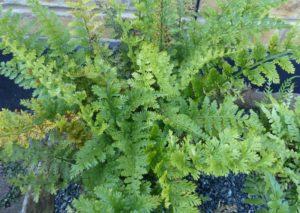 Just one taxonomic update. I have followed Labiak et al. in American Journal of Botany 101 ( 7 ): 1207 – 1228 , 2014 and have renamed Lastreopsis glabella and L. microsora as Parapolystichum glabellum and P. microsorum respectively.

In my previous list I also noted that there was a question mark regarding which species in the Adiantum venustum group was actually in cultivation. I have now looked into this and I happy to report that most or all cultivated plants are indeed A. venustum. 2 others species could possibly be in cultivation, A. tibeticum and A. fimbriatum, however they must be very rare. Adiantum davidii has been misidentified as A. fimbriatum in the past.