In general ferns are easy to grow, requiring little or no special treatment. They will grow better if attention is paid to the following:

Most ferns appreciate full or dappled shade, and few will tolerate full exposure to sun between about noon and 3.00pm, particularly in the warmer and drier parts of the UK.

Most ferns enjoy a humid environment, so some lateral and overhead protection, e.g. from trees or shrubs, is beneficial. Dry shade needs to be enriched with moisture-retaining mulch or compost.

Whilst some air movement is beneficial, exposure to strong winds can be harmful. Humidity will be seriously reduced in wind, which will increase water loss from the ferns. Mechanical damage to fronds is also likely, especially with delicate fronded species such as Adiantum aleuticum.

Ferns do not differ markedly from many other garden plants in their soil requirements. The ideal soil is humus rich, with a high leaf mould content, but ferns will grow in most good garden soils, even clay, because it is moisture retentive.

Providing that soil pH does not stray too far from neutral pH7, many ferns will be happy, but a pH slightly on the acid side of 7 (e.g. pH 6.5) is the best for general fern cultivation. However, there are exceptions. Some ferns prefer a higher pH, e.g. those that normally grow in limestone areas. See our leaflet ‘Ferns for different garden conditions’.

A moist but not water logged soil is best for most ferns.  Wild ferns often grow in situations where the ground water is on the move, not static. Few ferns will tolerate dry soil, and some British ferns require boggy conditions, including Osmunda regalis.

Wild ferns are found more commonly on sloping sites where the ground water is not static.  However, such sites are infrequently available in gardens, and level sites are perfectly satisfactory providing the other environmental factors described above are met. South-facing sites must be fully shaded.

Most native British ferns in general cultivation will tolerate frost, and many are deciduous as a coping strategy. Notable non-deciduous (“wintergreen”) British ferns are Polystichum, Polypodium and Asplenium.  Many garden grown ferns are from warmer climates overseas, such places as Japan,  New Zealand, and the Canary Islands, and these vary in their hardiness. Consult a good garden fern book for climate zone charts and indications of which ferns will grow in your zone. 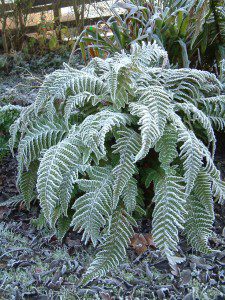 Feeding and after care

Relative to many other garden plants, ferns have a low nutrient requirement; indeed overfeeding will result in a softening of the tissues and some legginess.  A sprinkling of bonemeal in the spring is all that is required, and even this is not essential.  An autumn mulch will help to maintain the humusy nature of the soil.  The fronds of deciduous ferns can be tidied away in the late autumn if required.

Ferns are amenable to pot culture, particularly useful where non- hardy ferns are being grown.  As with any pot grown plant, watering is essential and some feeding is beneficial, but use feed sparingly and at half-strength.

Ferns are all basically green in different shades, and of course do not have flowers.  However some other colours do occur, such as the strikingly reddish-green patterning of Athyrium niponicum ‘Pictum’, or the red of newly-emerging fronds of Dryopteris erythrosora and many members of the Blechnum family.  Woodland species such as trilliums and arisaemas are ideal associations, while hostas and evergreen shrubs make good contrasts, but this is all a matter of personal choice.

Generally ferns are trouble-free but garden pests such as slugs, snails, and caterpillars may eat some ferns such as aspleniums, and may damage young croziers of other ferns.  Ferns, especially aspleniums, are also susceptible to vine weevil attack.  Biological controls e.g. nematodes that attack the pests, are available and are more environmentally friendly than chemical pesticides.  Mulching with substances that slugs and snails find it difficult to move across, e.g. bark or sharp gravel, can also be helpful.

Ferns may also be damaged by the leaf-mining caterpillars of the Fern Smut moths. These tiny larvae cause brown patches on the fronds, and use the developing spore cases as shelters, heaping them into mounds.  Remove and burn any affected fronds at the first sign of disease, as the alternative insecticide remedy, a neonicotinoid, may well harm your bee population.

This group of ferns have fronds only one cell thick, and grow in conditions of very high humidity and shelter.  They are rarely cultivated in the open garden.  Most enthusiasts use a fish-tank or other container to maintain the humidity.  There are three British species, none of which are easy to grow even when pampered!  It is of course illegal to remove these from the wild.  Species from other countries, e.g. New Zealand, may be easier to grow and commercially available.

There are several British ferns, notably aspleniums, which frequently grow on walls.  These are ideal for rockery cultivation in the open garden, and can tolerate more sun and less moisture than the ferns of woodland habitats.  Overseas however are a group of ferns (mainly in the genus Cheilanthes) that are truly xerophytic, that is they can tolerate periods of dryness when their fronds shrivel, only to unfurl again when rain occurs.  Only a  few are even slightly hardy in Britain, and rather surprisingly all are tricky to cultivate, even if closeted in pots.  Winter wet is anathema to them.  The best growers of Cheilanthes tend to be members of the Alpine Garden Society!

There are about 700 tree fern species worldwide in the genera Dicksonia and Cyathea (although some members of other genera can form trunks).  Most are tropical, but a few are half hardy here.  The hardiest, and the one most widely available, is Dicksonia antarctica, often sold as trunks cut down in Tasmanian forests.  They survive out of doors in the SW of Britain, but will suffer in severe frosts.  Consult a book such as Martin Rickard’s ‘Gardening with Ferns’ – see below–for tree fern cultivation requirements.