Plagiogyria is the sole genus in the family Plagiogyriaceae. There are about 13 species currently accepted, 10 in East Asia and the western Pacific and 3 in the New World from Mexico and the Greater Antilles south to continental South America. In appearance they are remarkably similar to species of Blechnum, those with dimorphic fronds in particular. However the resemblance is entirely superficial. During the 19th century they were usually classified under Lomaria along with dimorphic Blechnum species. In the early 20th century it was realised that they were unrelated to Blechnum and were placed in their own family that was thought to be related to Osmundaceae or Cyatheaceae. The sporangia closely resemble those of tree ferns and recent molecular evidence indicates that they are indeed closely related to some of the smaller families in the Cyatheales.

Despite their remote relationship the morphological differences from Blechnum are quite subtle. The most easily examined external difference can be seen in the scales. In Blechnum these are always apparent on the rhizomes and young fronds and they often persist on the mature fronds even if only sparsely. In Plagiogyria scales are completely absent. This is most obvious at the rhizome apex were the naked unfurling fronds can be observed.

Plagiogyria are almost unknown in cultivation in the UK. I am not sure why this should be so as they are very attractive ferns. I am aware of 4 species that are currently grown or have been recently in cultivation.
Plagiogyria pycnophylla, a robust species with handsome glossy fronds.
P. stenoptera, smaller, shortened pinnae lobes along stipe.
P. matsumureana, deciduous so should be the hardiest species. This used to grow by the old alpine house at RBG Kew. I wonder what happened to it?
P. glauca. I have not seen this but there are pictures on the internet of a plant in cultivation. The frond lower surfaces are glaucous or even an amazing bright white.

In Japan I saw 3 more species, P. japonica, P. euphlebia and P. adnata along with probable hybrids. They did not grow in unusual habitats and appeared to require typical woodland fern growing conditions, adequate moisture, humidity, shade and good drainage. There does not appear to be any reason why these ferns are so scarce in British gardens unless they are difficult from spores.

I would be very interested to hear from anyone who is growing these interesting ferns. 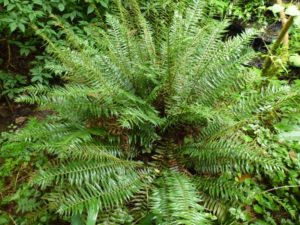 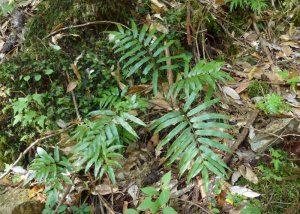 2 thoughts on “Plagiogyria – a fascinating oddity”